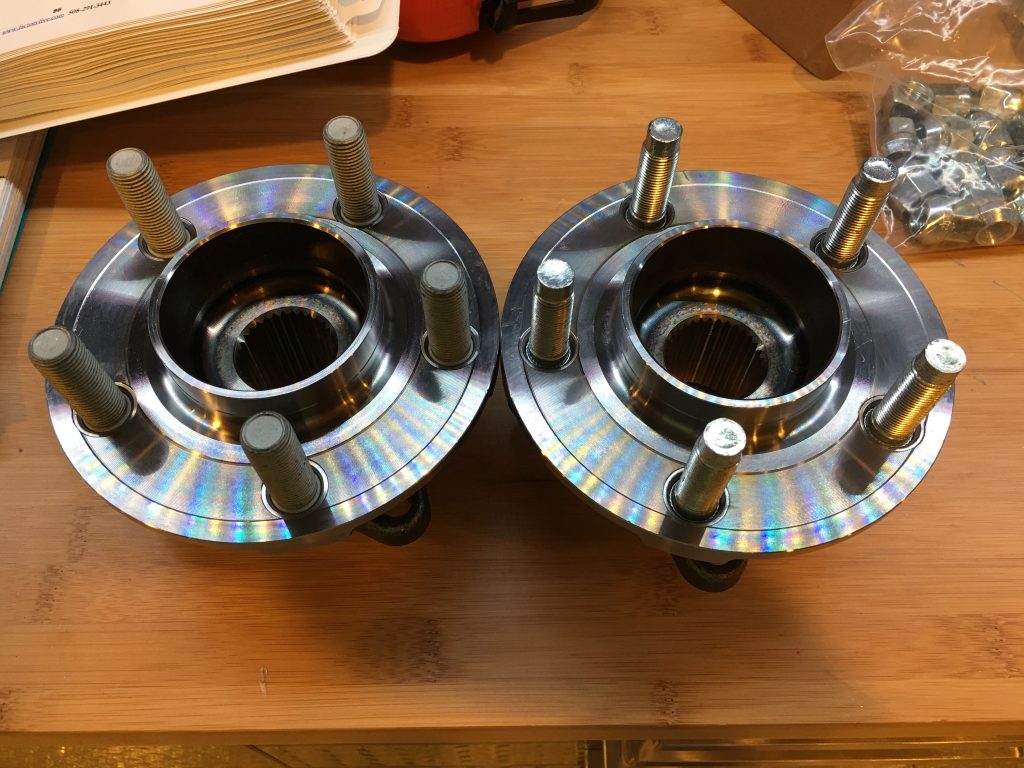 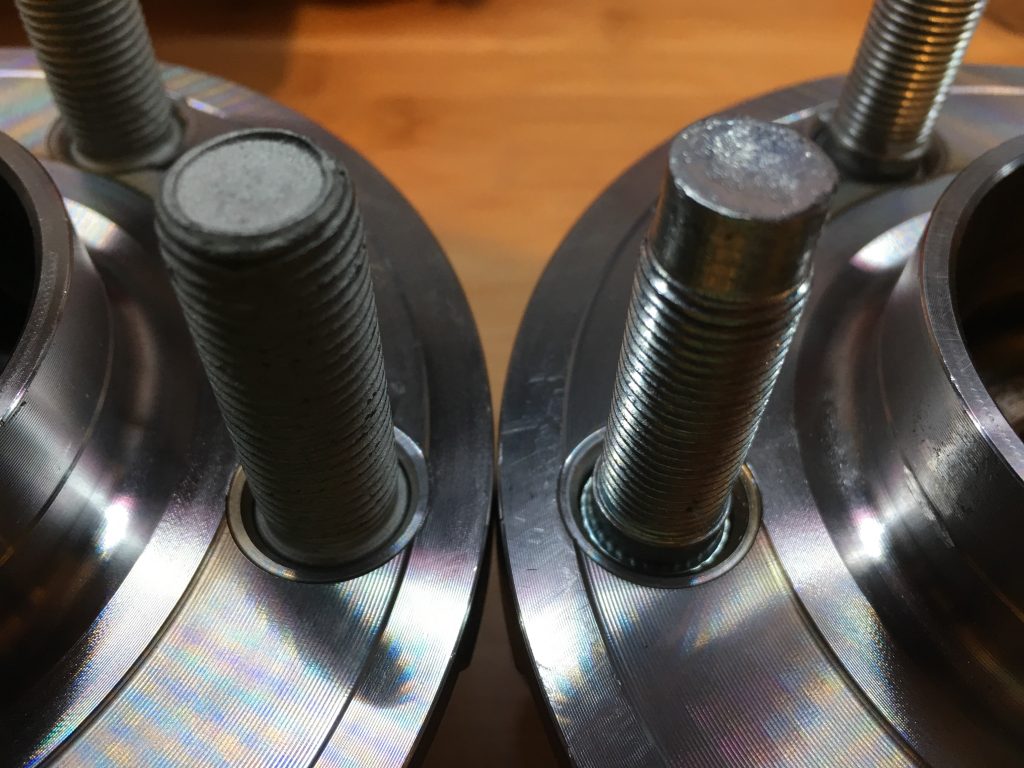 I stopped by BR Racing this morning to get our tires mounted. They have a really nice touchless mounting system that grips the wheels through the lug nut holes. 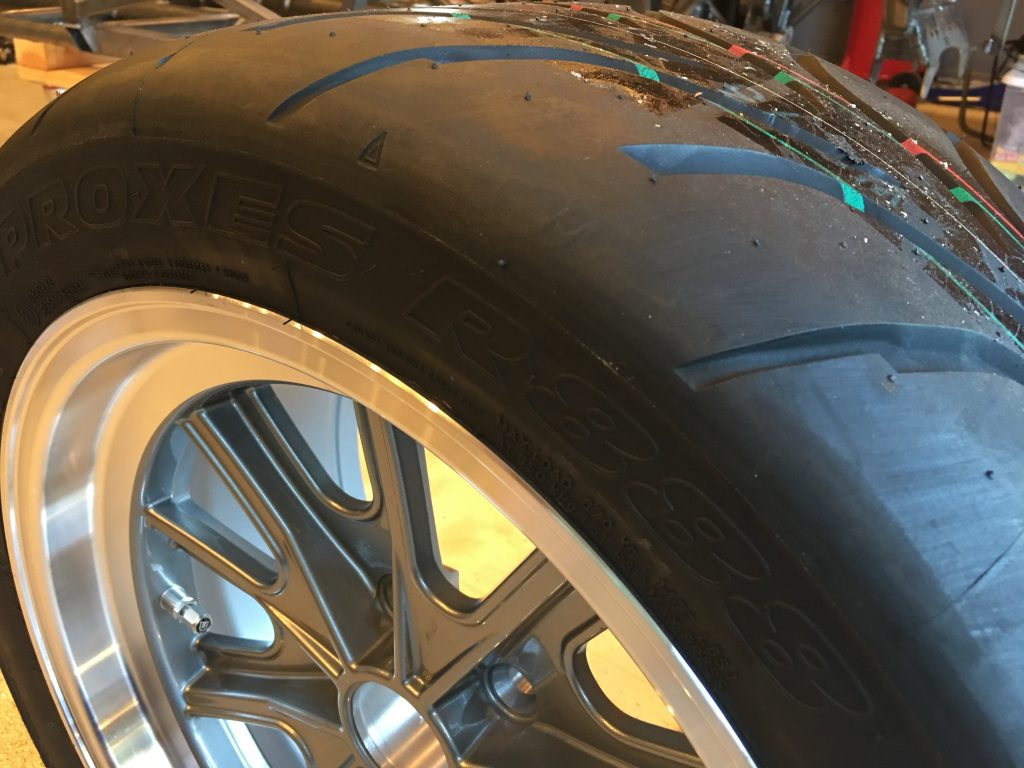 I picked up a tire pressure monitoring system and had BR Racing install the sensors inside the wheels. The system has a really small display that should be fairly discrete on the dash. 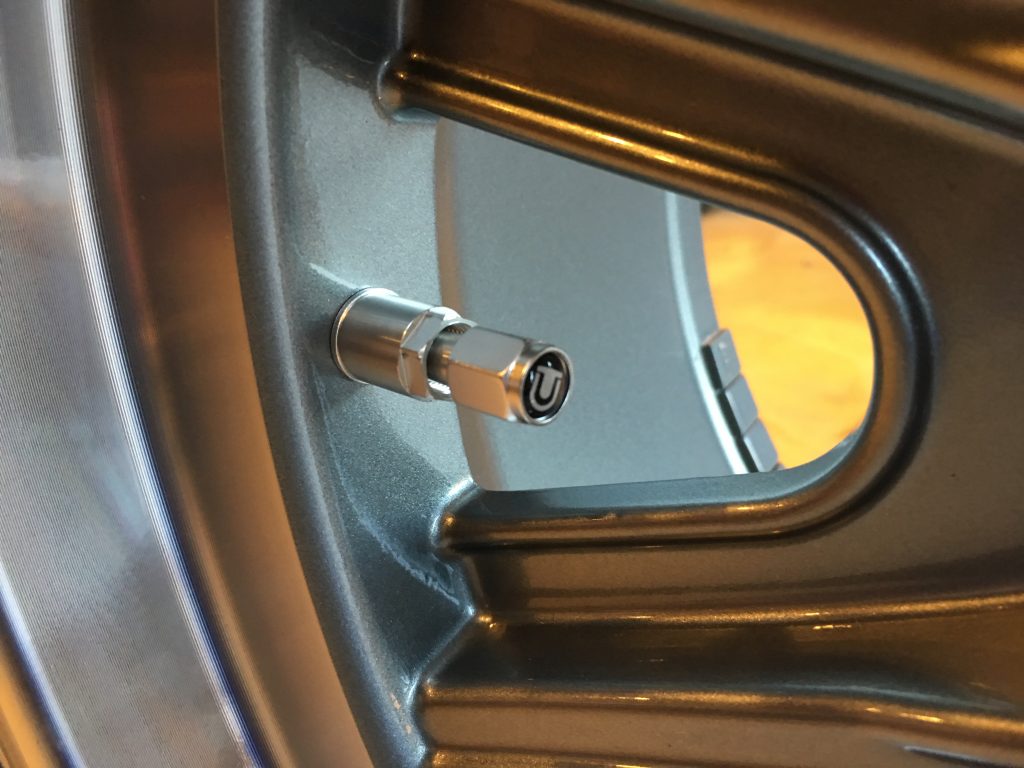 I finished grinding all of the sharp edges and weld spatter off the bottom of the chassis and then welded in the floorboards from the bottom. 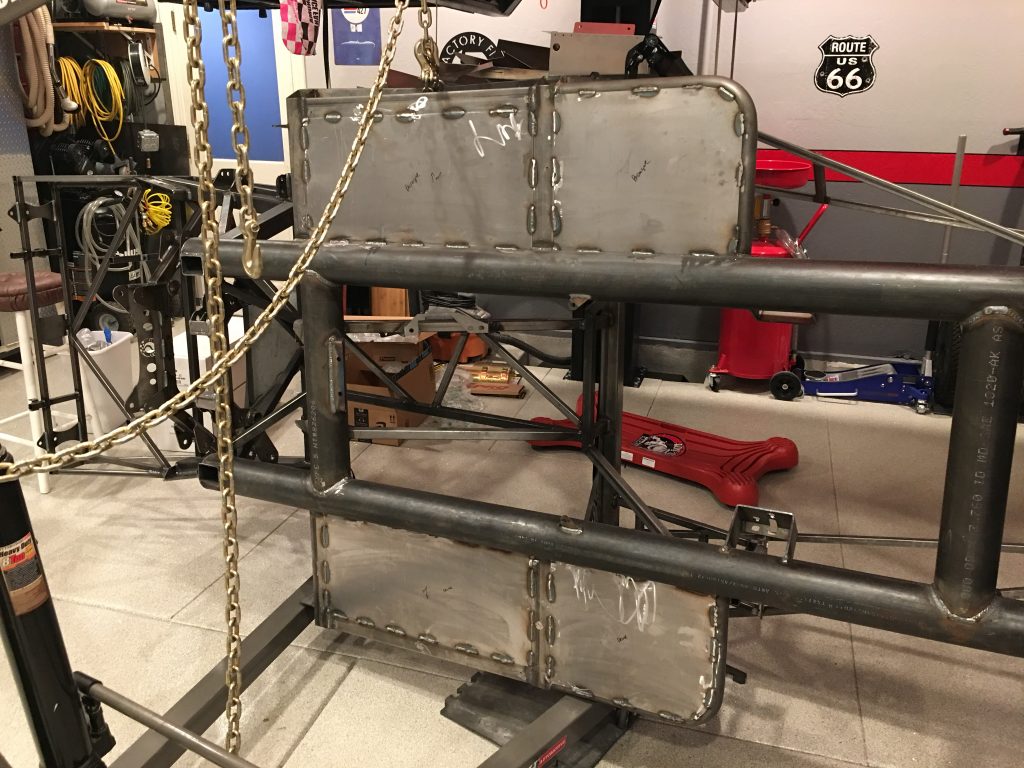 I put the chassis back on the dolly and then added additional welds on top of the floorboards. 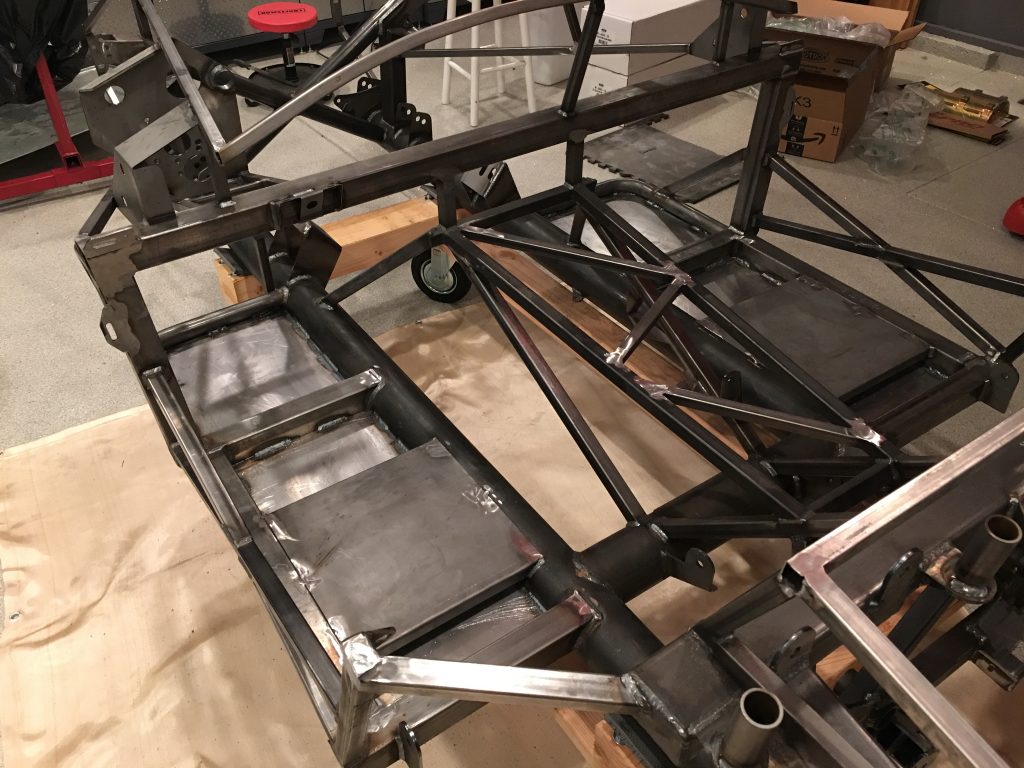 After dialing in the settings on the welder, I’m getting much more consistent welds. It’s still a little tricky to get sufficient penetration on the thick tubing without blowing through the thin plate, but using a zig-zag pattern and spending 60-70% of the weld time on the thicker stock works pretty well to get even penetration on both pieces. 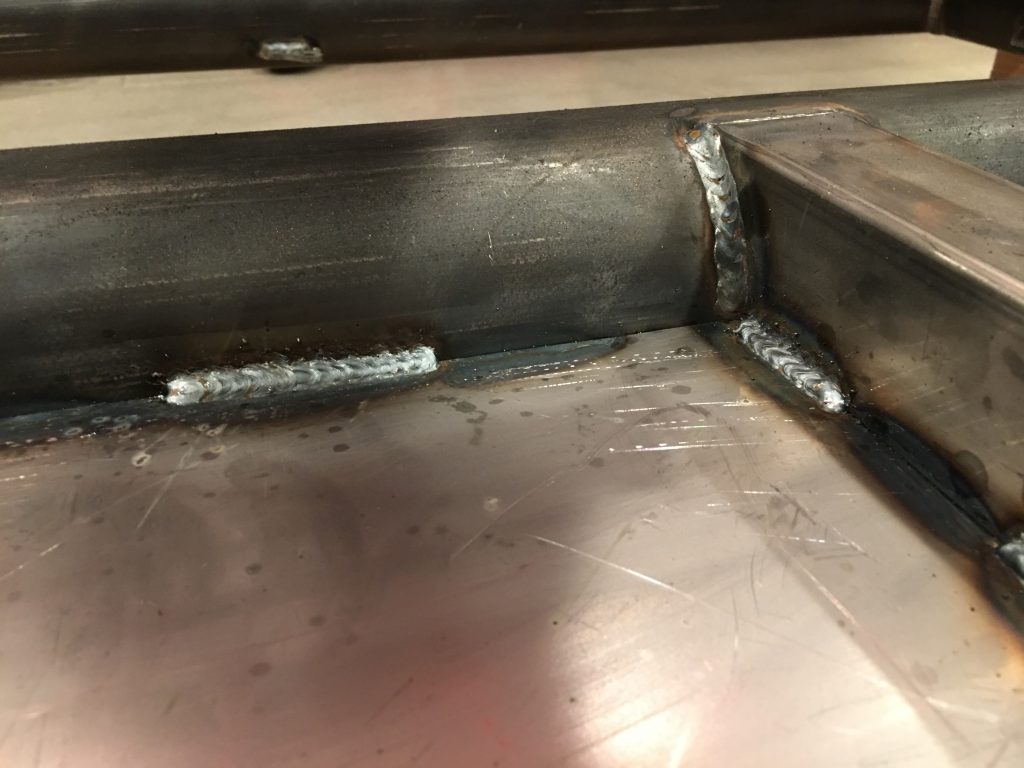 I picked up a sheet of 18ga steel at a local metal supplier this morning and stopped by the TechShop after work to cut them to size. I ended up deciding to cut each side into two pieces instead of one. Each side has a long, rectangular piece and a short, rectangular piece with a radiused corner. 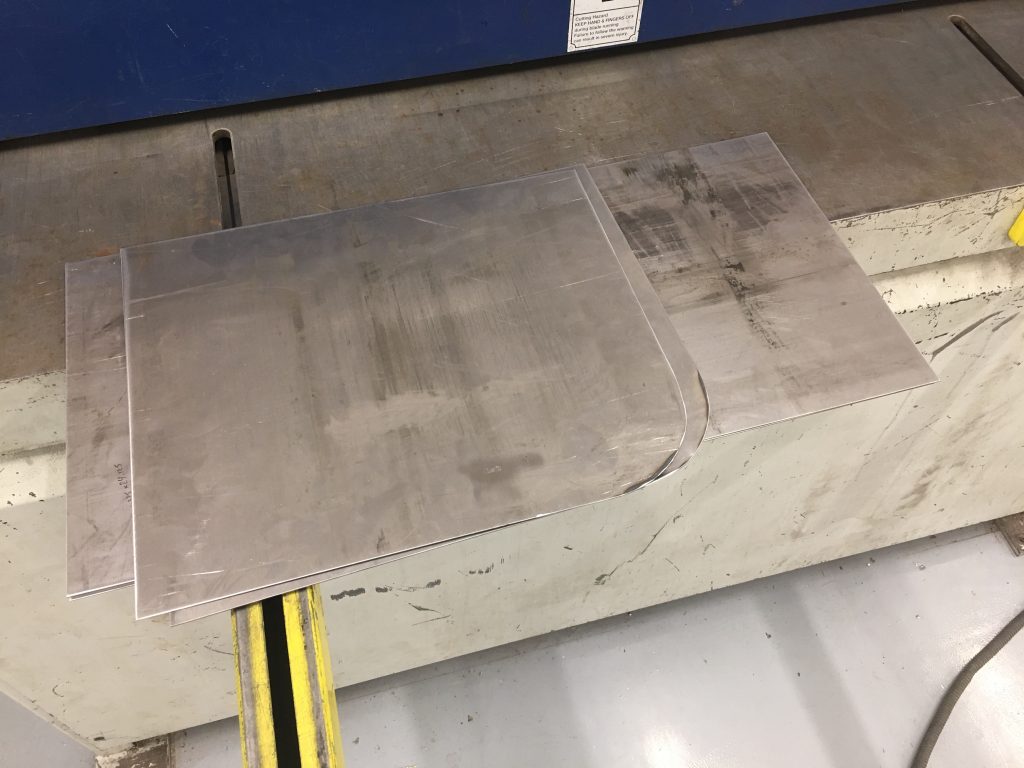 I test fit each of the panels. 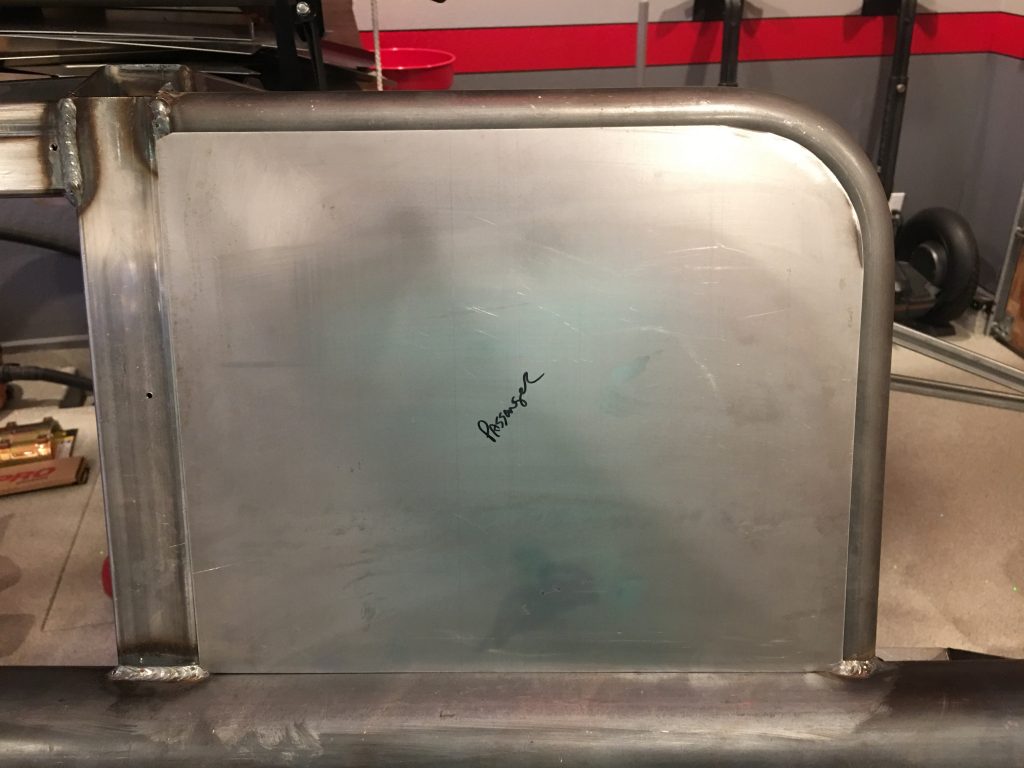 The corner radius was not quite right, but it will work just fine. 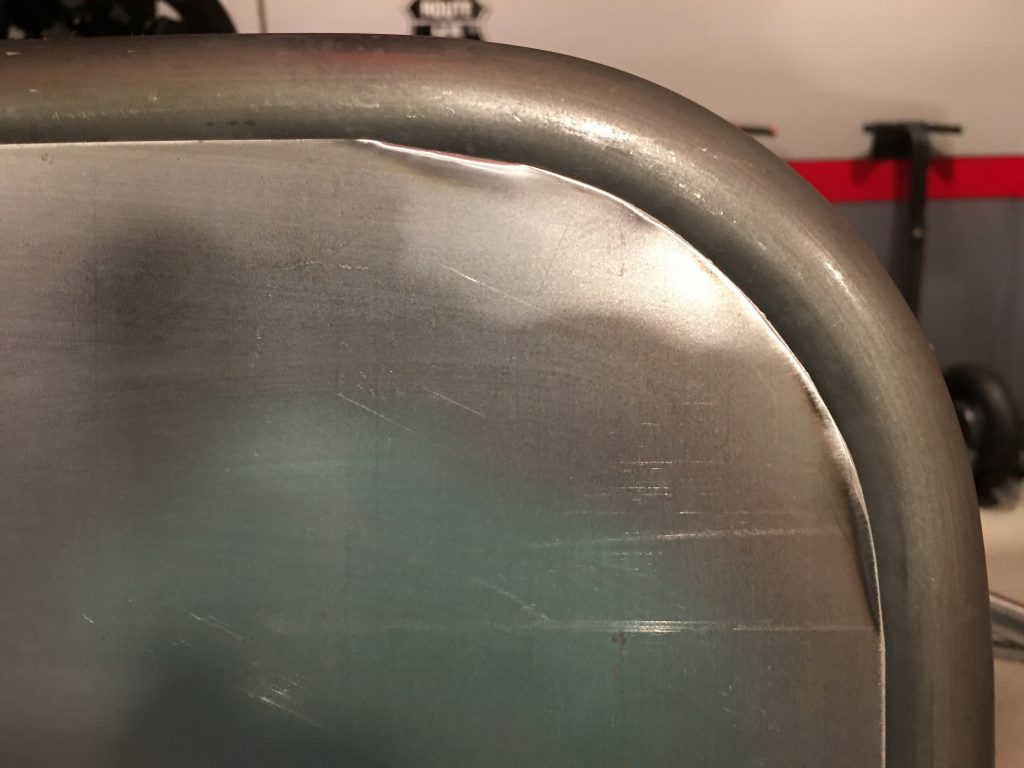 The only modifications I needed to do were to clip the corners to clear the existing welds. 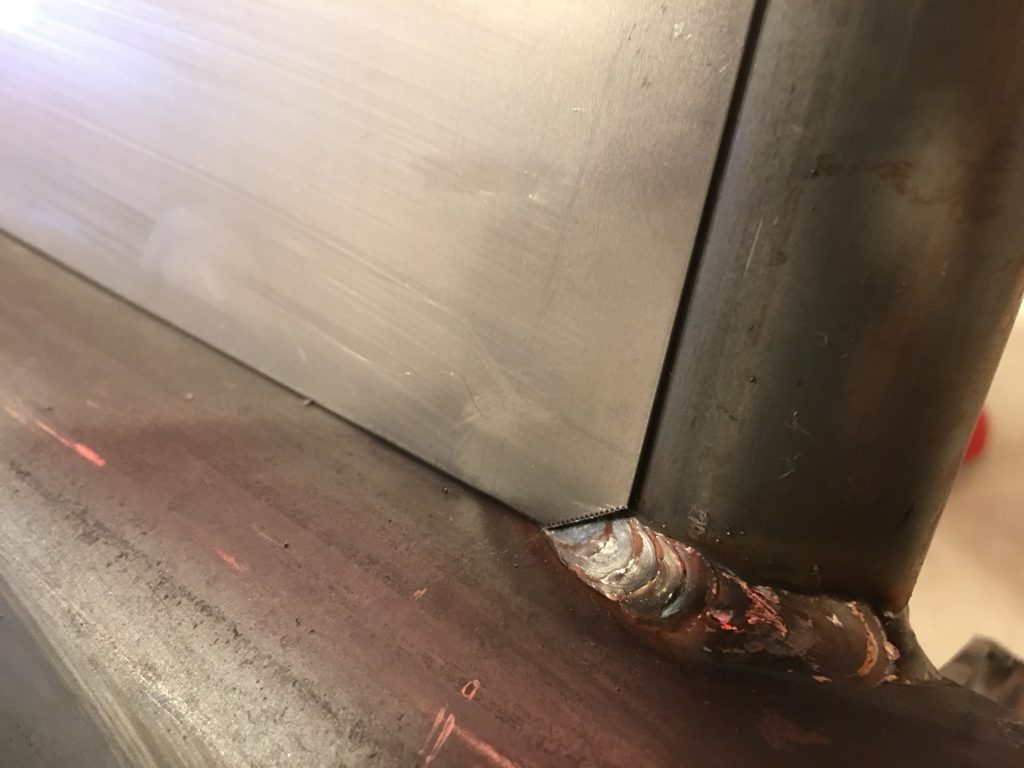 I set up the welder with the solid core wire and CO2/Argon gas bottle and welded the panel in place. I played around with different voltages/wire feed speeds until I found settings that worked pretty well. 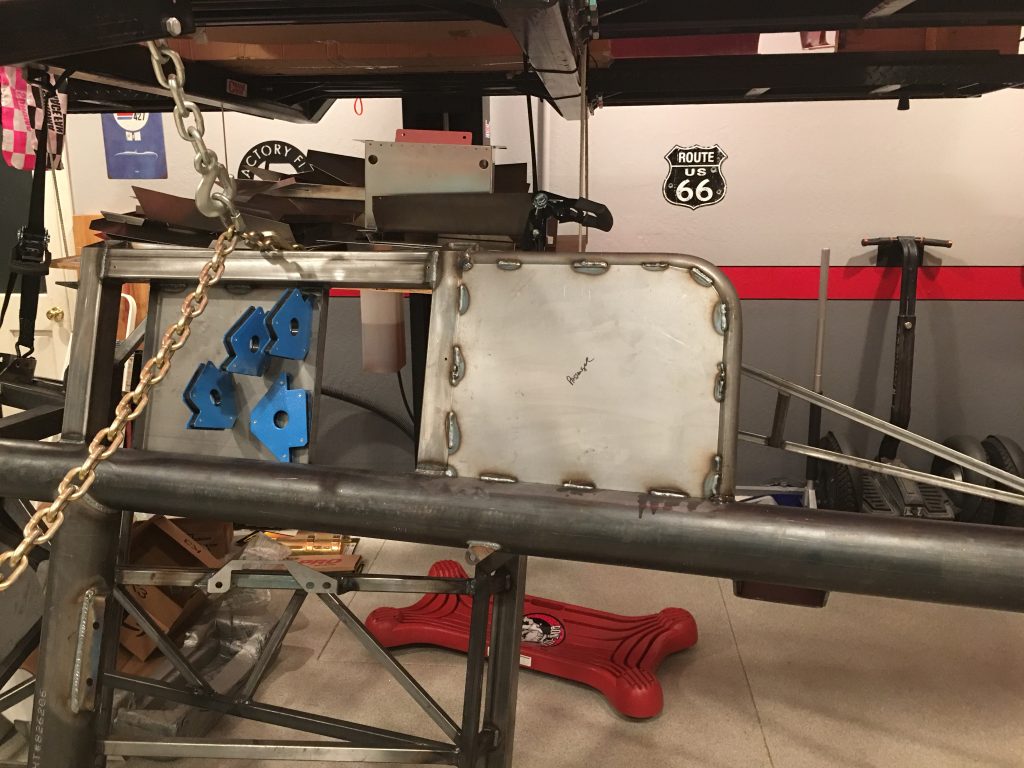 Not all of the welds looked this good, but they should all be plenty strong. It was too late to weld in the other floorboards, so that will have to wait until tomorrow. 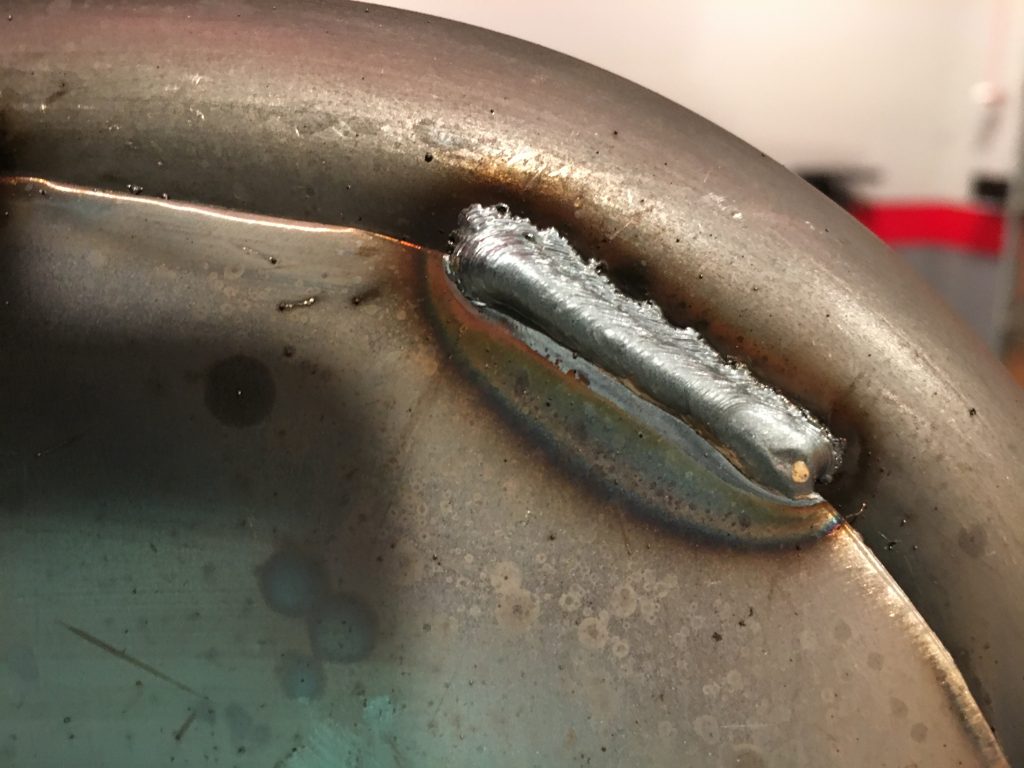 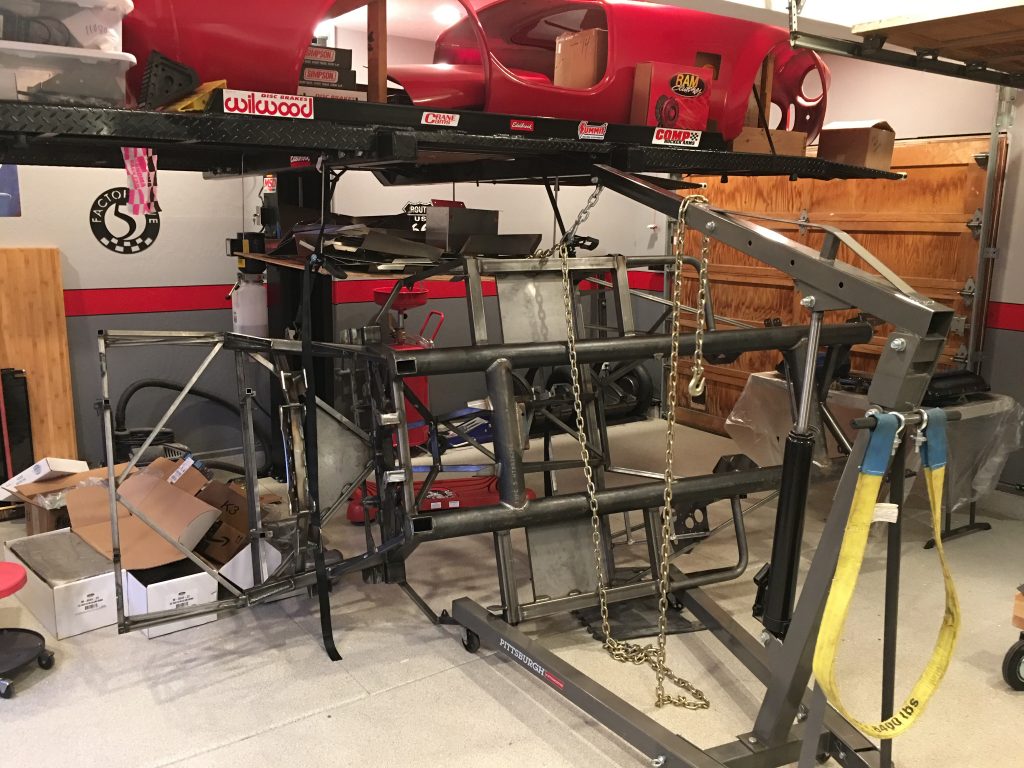 I finished taping up the engine block, heads and timing chain cover and cleaned them thoroughly before painting them with three coats of Eastwood’s high-temperature ceramic engine paint in gloss black. I haven’t pulled the tape yet since I want the paint to be fully cured before touching it. Touching the overspray on the tape showed that it will be easy to leave fingerprints in the paint until it’s cured. 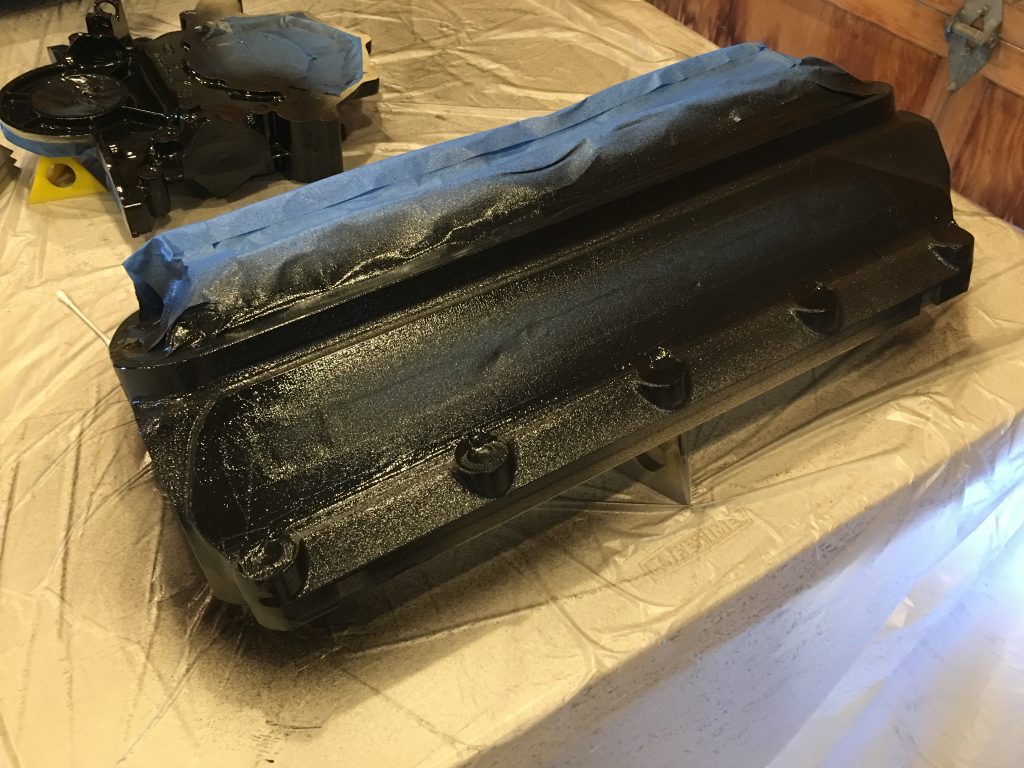 All of the surfaces on the heads and blocks that were painted were a fairly rough case surface, so it doesn’t result in a truly glossy surface, but I think it looks really nice. 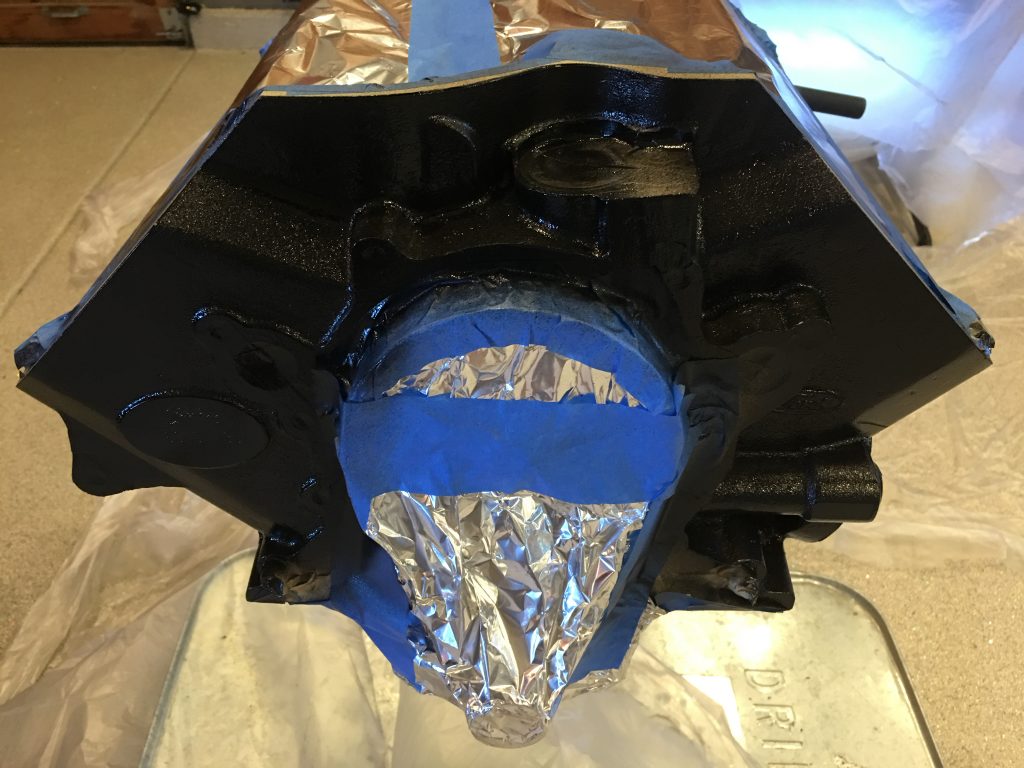 The timing chain cover is a smooth casting, so it looks much more glossy. 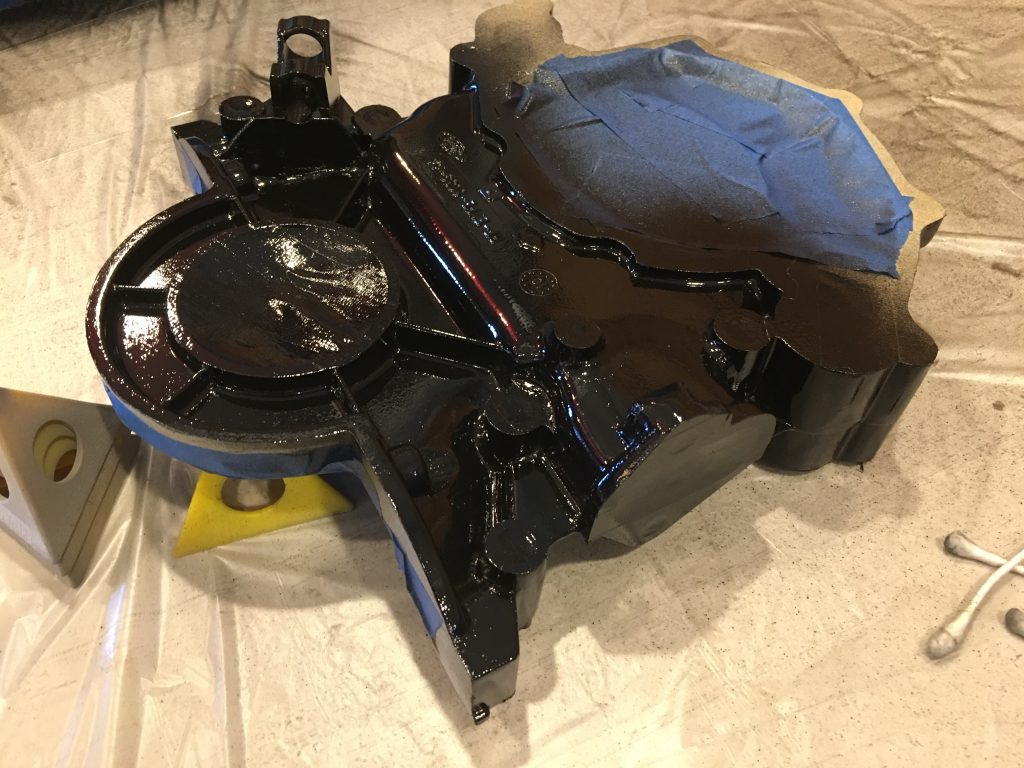 While I taped up most of the front of the engine, there was a small oval part of the casting that had been sanded smooth and engraved with the Ford Racing logo and block part number. I didn’t mask that off and painted right over it. I took some 320 and 400 grit sand paper and sanded off the paint on this oval. 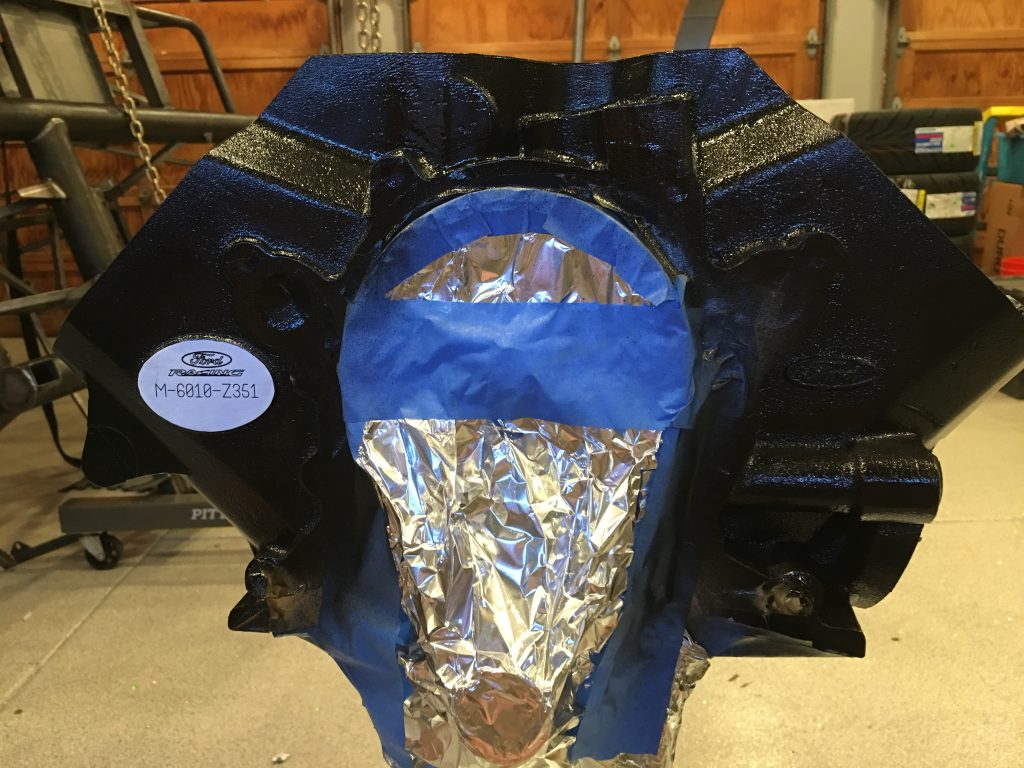 This left the paint down in the engraved areas. It’s unfortunate that the “c” in Racing” wasn’t engraved properly, but I still really like the way this looks. 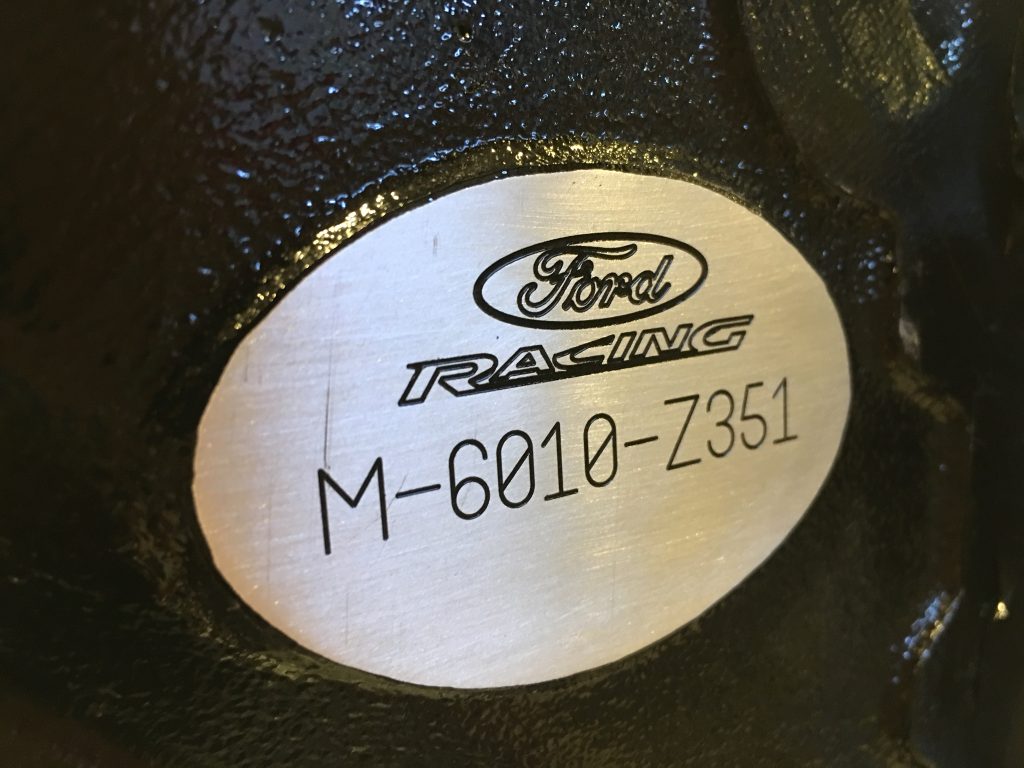 We received the new rotors from Wilwood today. I was super happy to see that these are also powder coated black since that will prevent rust on all of the non-braking surfaces. 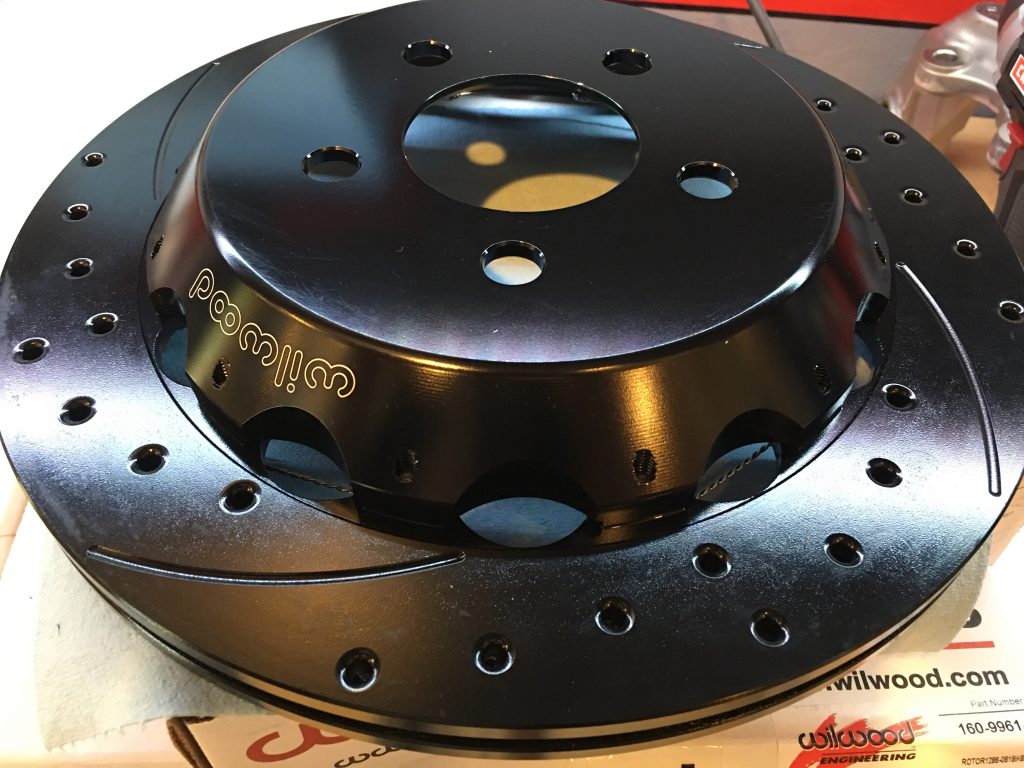 I installed all of the bolts that attach the rotors to the hats with both red thread locker and safety wire. It seems unnecessary to do both (especially with red thread locker), but it wasn’t too much work and given how catastrophic a failure in this area would be, I’d rather be safe than sorry. 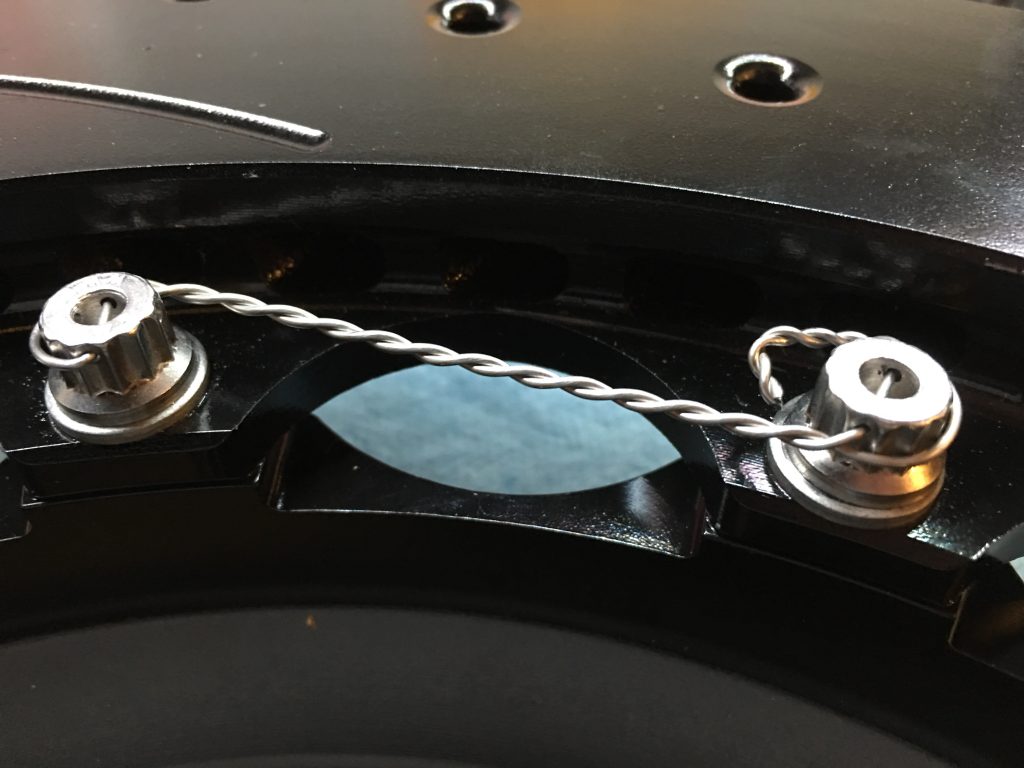 We received our wheels from Factory Five today. These are the 17″x9″ front and 17″x10.5″ rear Halibrand replica wheels. I pulled them all out to make sure they look good, but didn’t get any pictures of them. 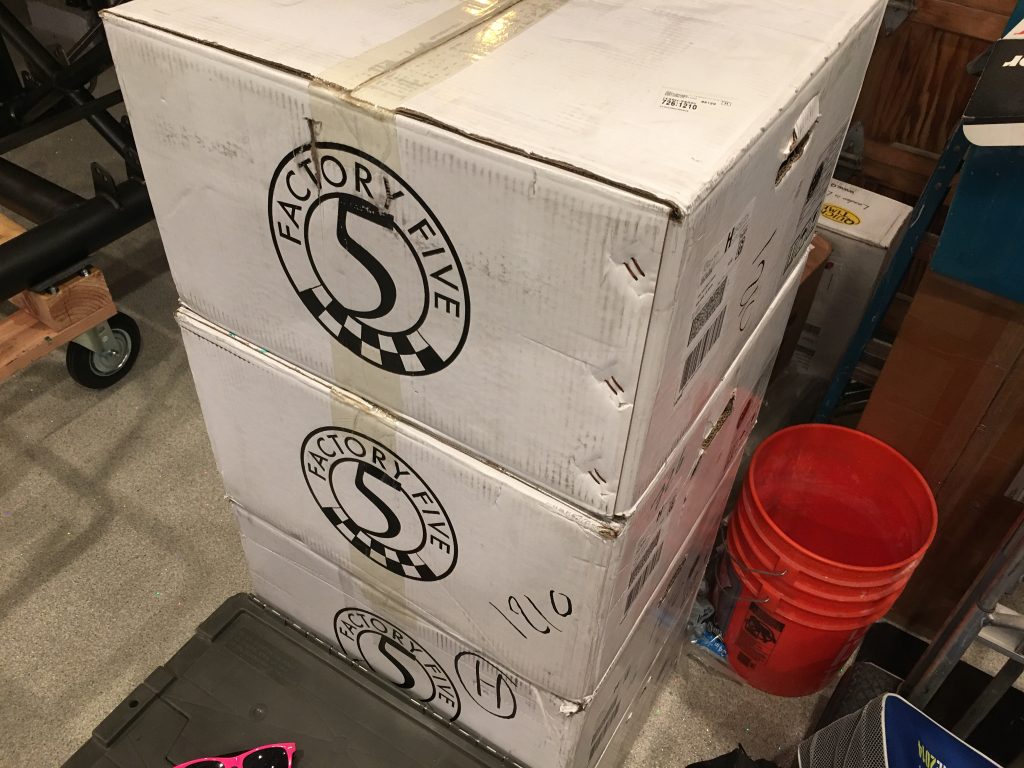 Afterward, I finished masking the block. Other than a final cleaning, this is ready for paint. 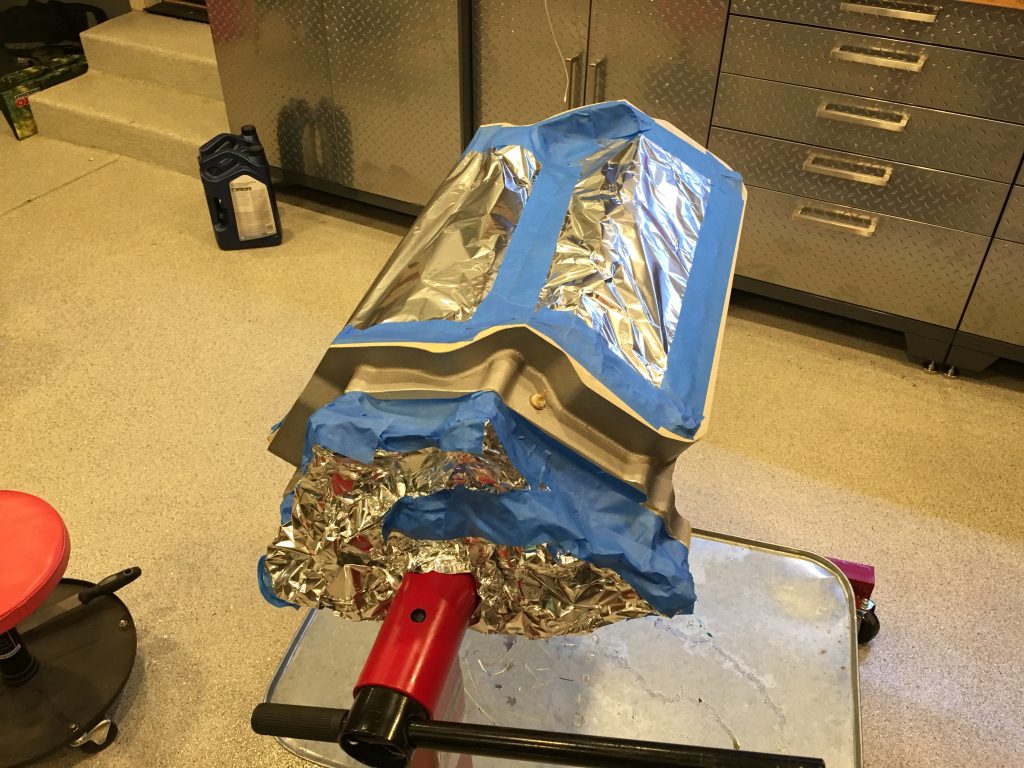 I thoroughly cleaned the timing chain cover and started masking it for paint. The process I’ve been using is to use tape around the perimeter of each section with regular masking tape since it sticks better than the blue tape, then using a razor blade to slice to the exact edge. Larger areas are covered with blue tape or aluminum foil. This is pretty time consuming, but it should produce a nice finished product. 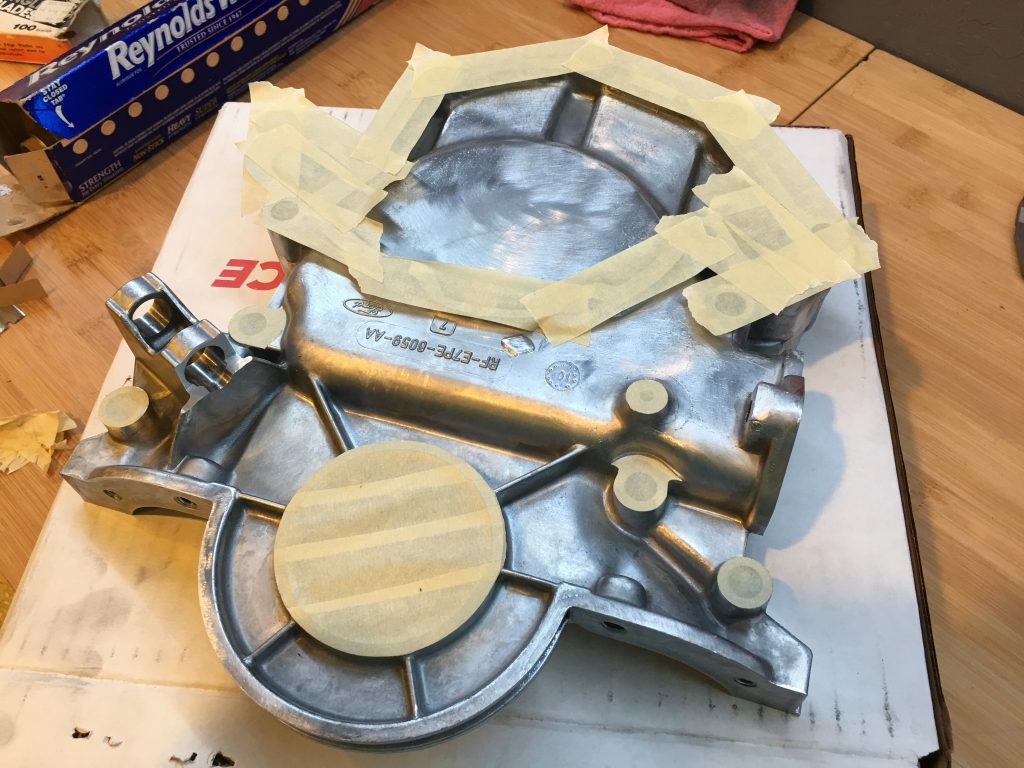 I received my Big Brake Kit from Levy Racing today. This is a custom color combination, so it took several weeks to get here, but we really like the look of the silver calipers with black lettering. These are larger than the Wilwood brakes that Factory Five sells by a fair amount. The rotors are 1.1″ thick which is 10% thicker, but more than 10% more massive. The mass of the rotor determines the thermal capacity and hence the amount of braking you can do before you start to get brake fade. These should be much better on the track than the set that Factory Five sells. These also use pads that are 40% larger than the factory upgrade, so we should see much better braking performance as well. 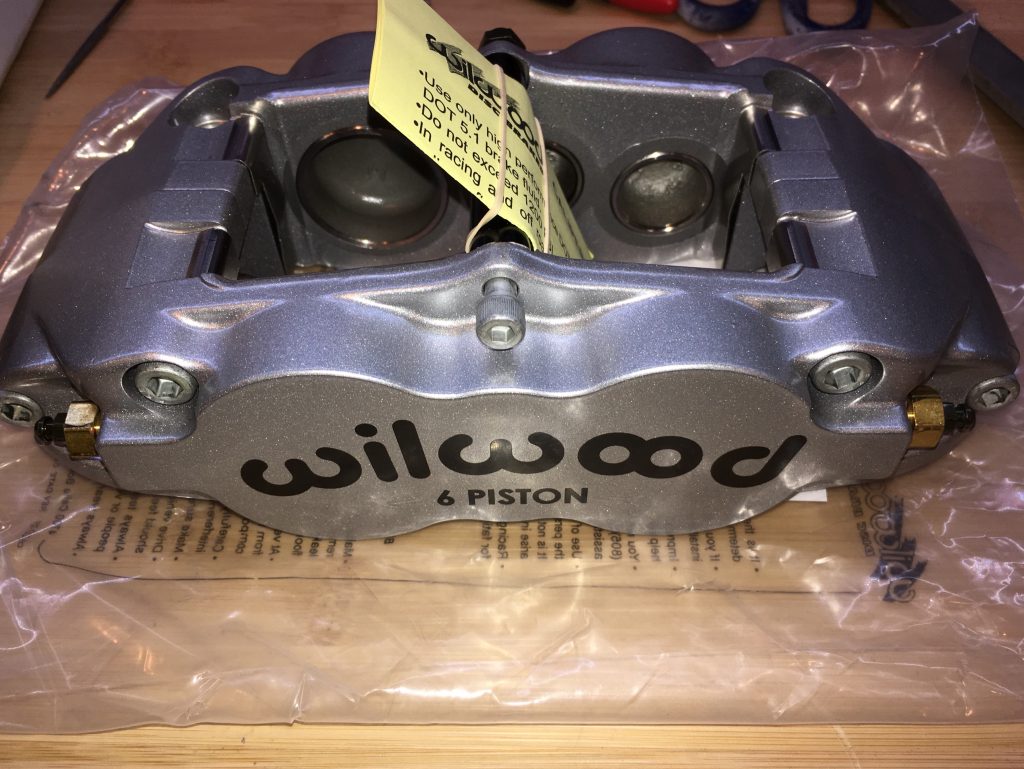 Unfortunately, one of the rear calipers was gouged (presumably during shipping). 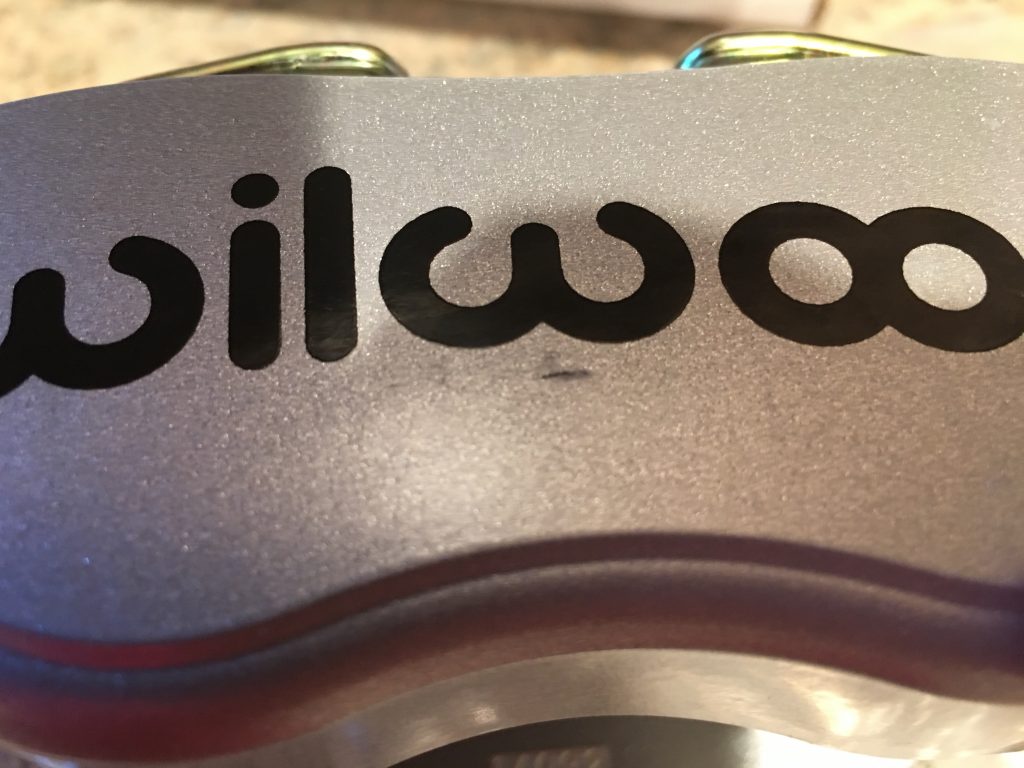 We also received slotted rotors even though we ordered drilled and slotted rotors. I sent an email to Gordon Levy and he was quite apologetic and immediately set about making it right. Things like this happen, but I’m always happy to work with great vendors who make sure their customers are taken care of. 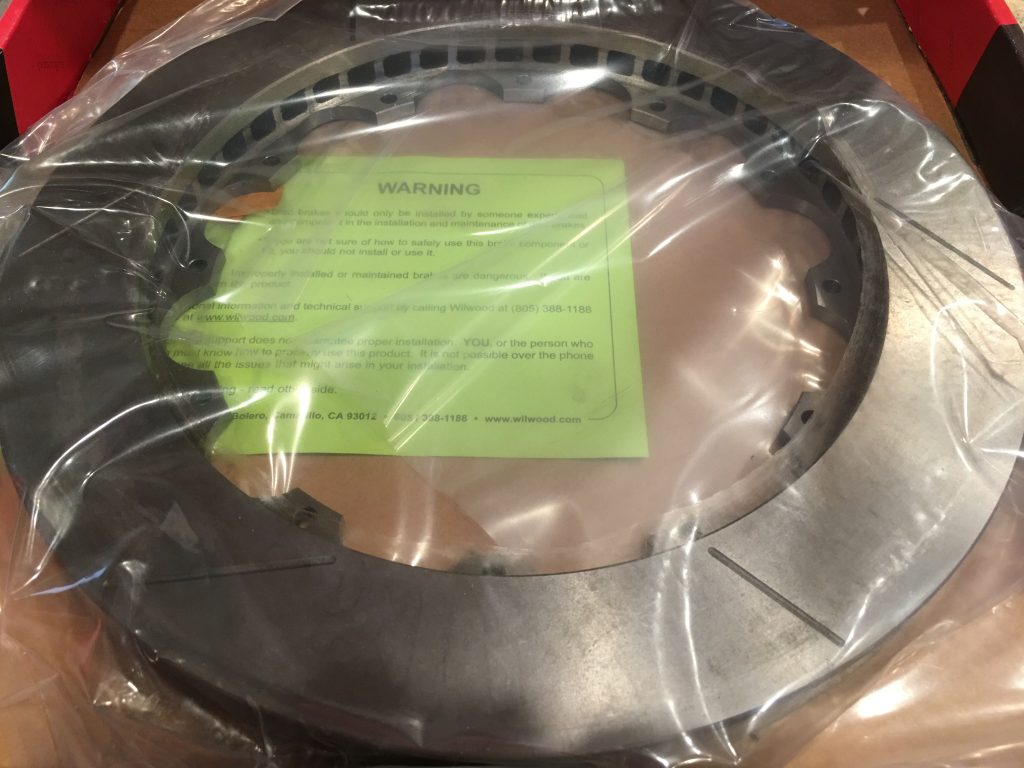 During the virtual engine build, I marked the head gaskets where they hung out beyond the block or the head. Tonight I finished trimming them to the lines I marked and then started getting the engine block ready for paint. I got about 2/3 of the block taped up before running out of steam; there are a ton of spots to mask on these blocks. 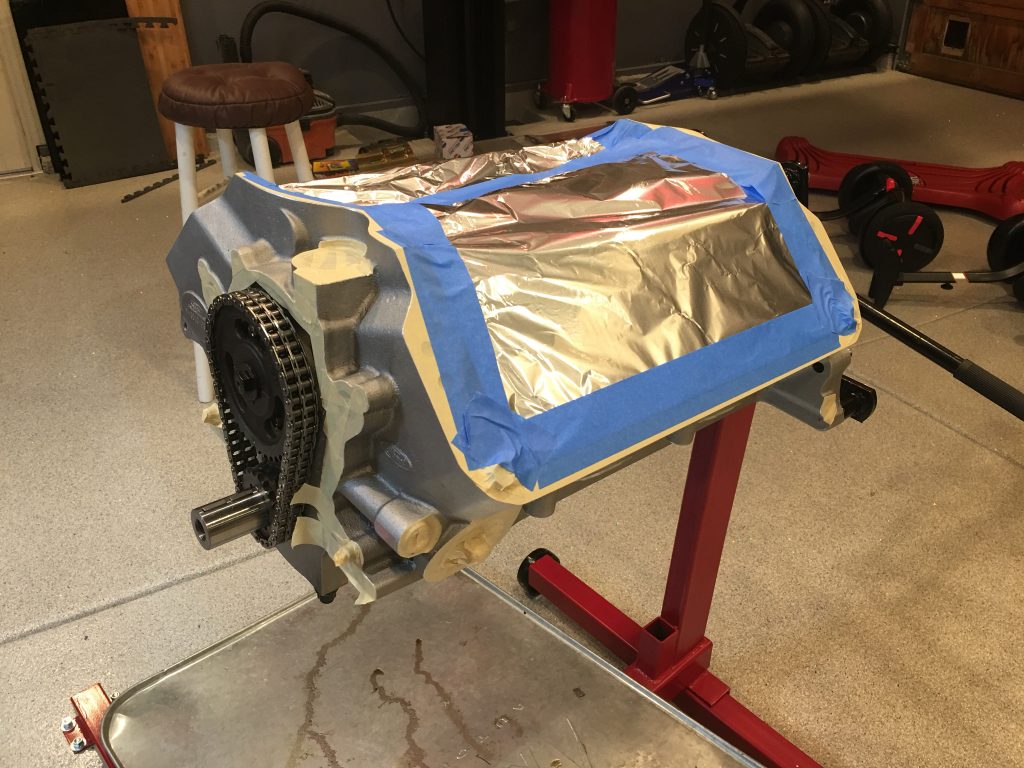 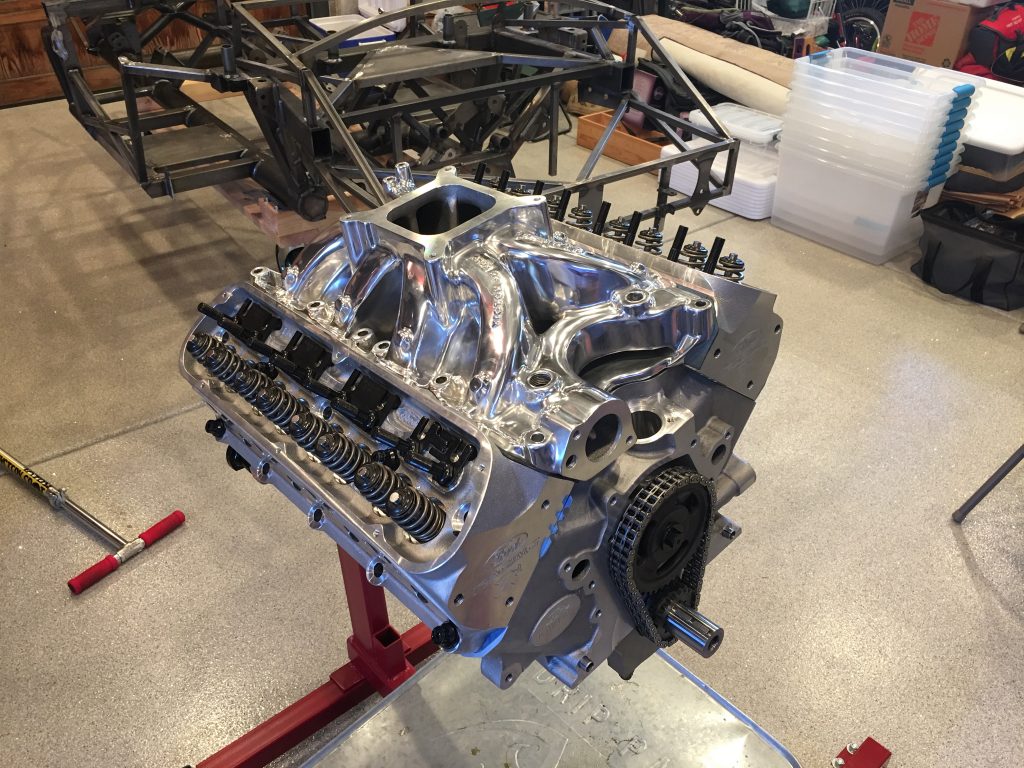 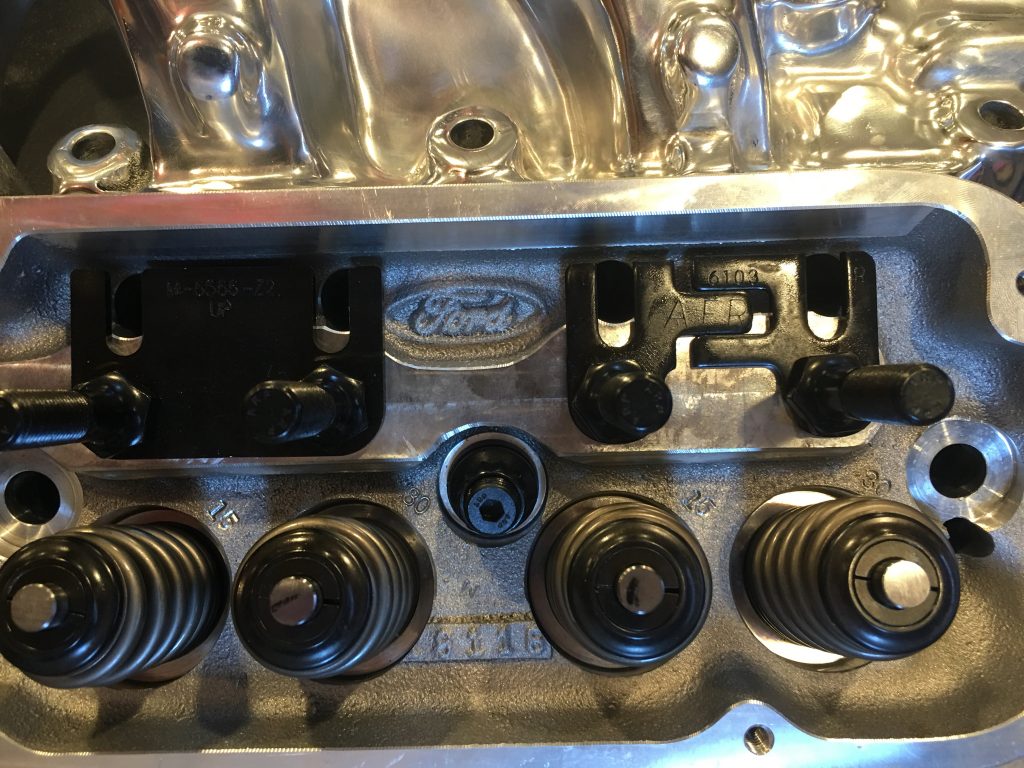