After thoroughly cleaning the engravings with some solvent and a toothbrush, I put some of the of the engine paint over the engravings until I couldn’t see them. After letting it set up for a couple of hours, I used a solvent-soaked q-tip to remove most of the excess paint. I didn’t want do too much at this point since the paint is still soft. 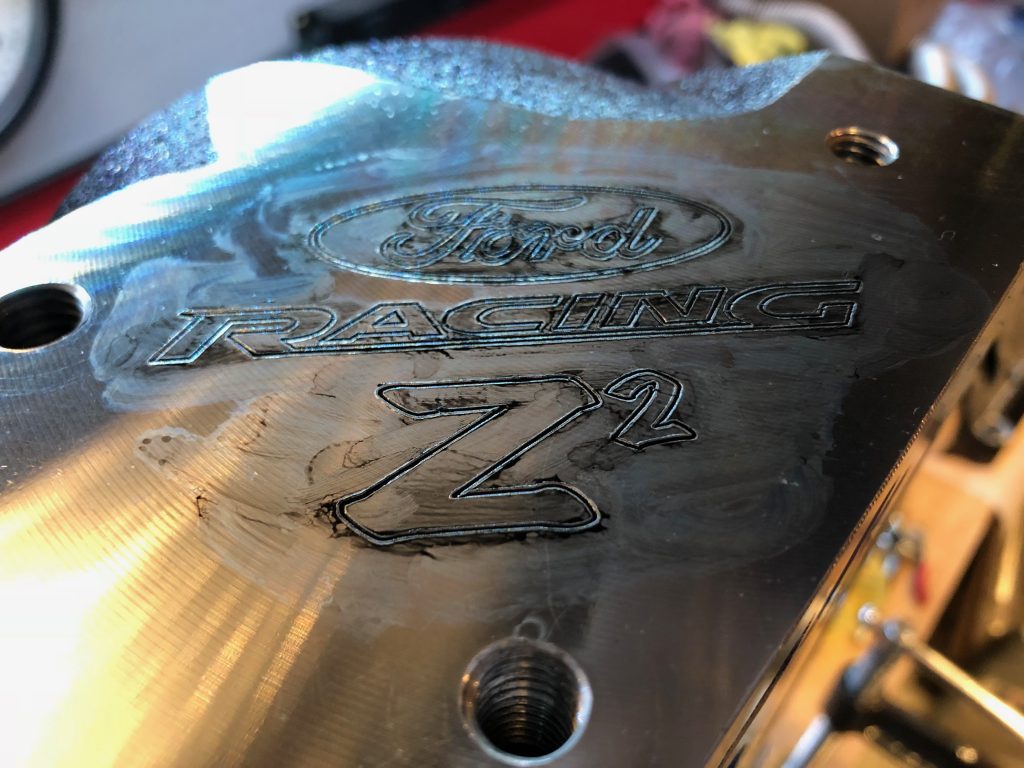 After letting the paint cure overnight, I used more solvent-soaked q-tips to remove the rest of the excess paint. This technique works wonderfully and the engraving really pops. 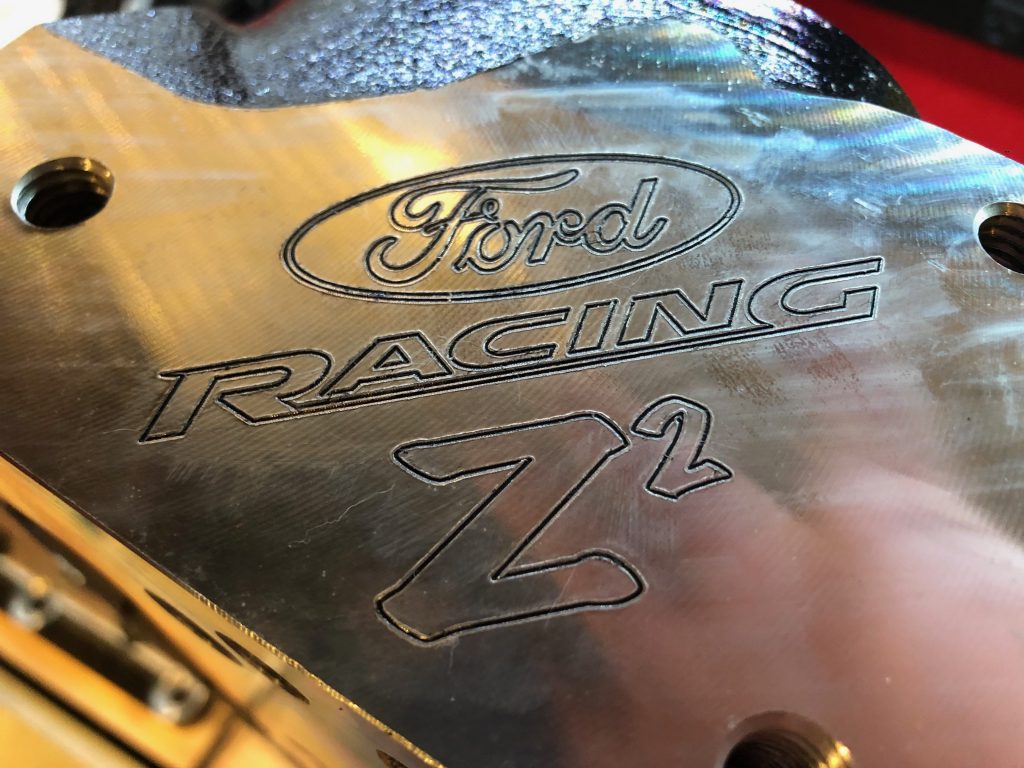 Even though we’re essentially certain the heads are fine, we still had one head with known damage from the nut going through the engine. It just turned out not to be on the side where he was adjusting the lifter. Since we had already ordered a replacement head, I could either return that or replace the damaged head. I decided to replace it.

I spent a couple of hours tearing down the right side of the motor tonight until it was at the same place as the left side. 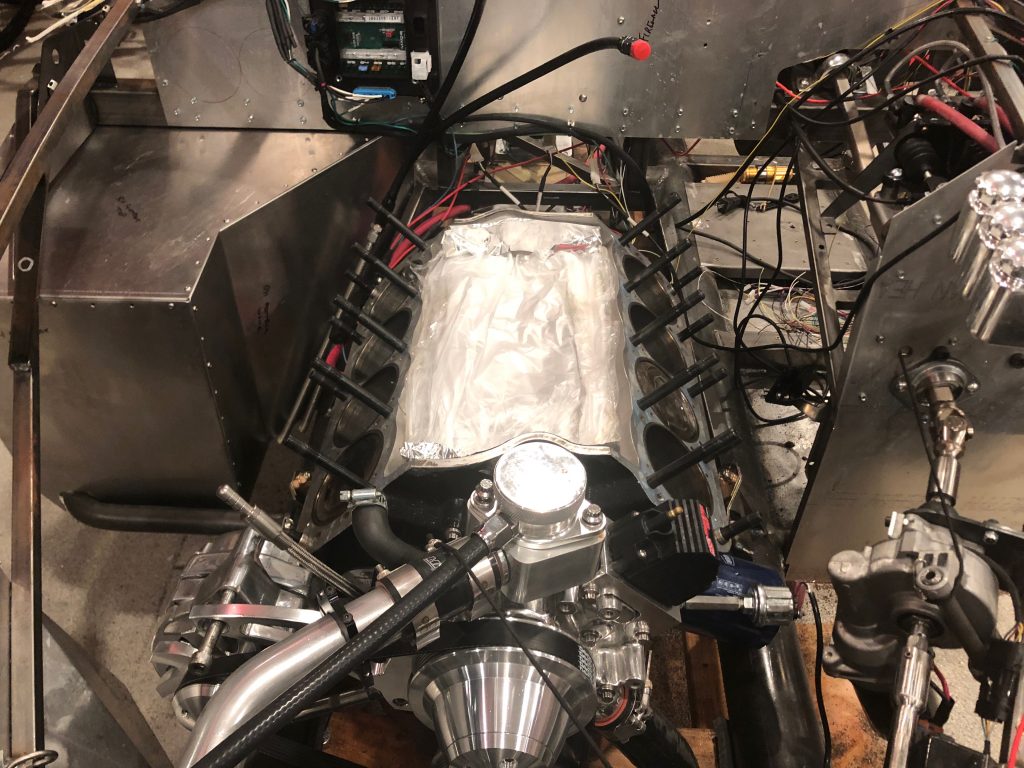 I cleaned and masked the new head, then sprayed several coats of Eastwood’s high-temperature ceramic engine paint in gloss black. 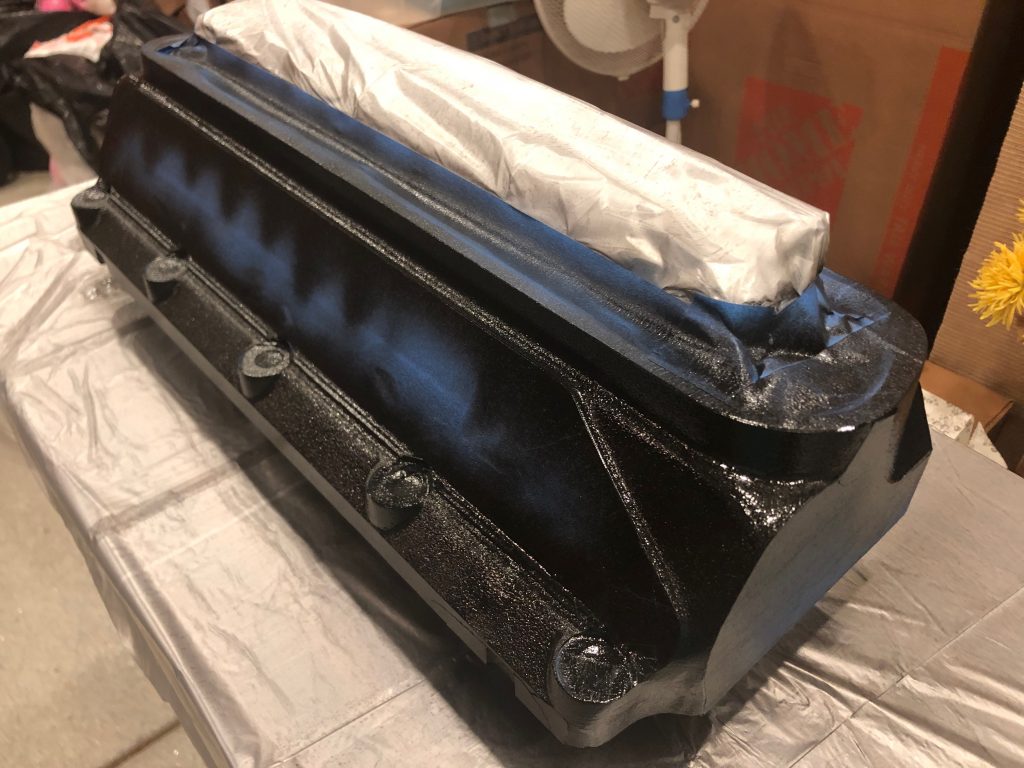 Since we’ve eliminated every component of the valve train, the only other place the noise could be coming from is the bottom end of the engine. We know the top of the piston in cylinder #6 was heavily damaged by the nut, and it’s possible that it broke a ring or damaged the area around the wrist pin from the excessive forces of hitting TDC with a nut trapped in the cylinder’s squish area.

We called Ford Racing about this to get the part numbers for the damaged piston and ring set. They needed to have someone from another department look that up and told us they’d get back to us. Today, we got a shipping notice from Ford saying the parts will be here next week! No charge, apparently!

We need to pull the oil pan to remove the piston, and we can’t pull the oil pan with the chassis sitting on the car dolly, so we’re going to move the car over to the lift this weekend so that we can easily access the underside and drop the pan. 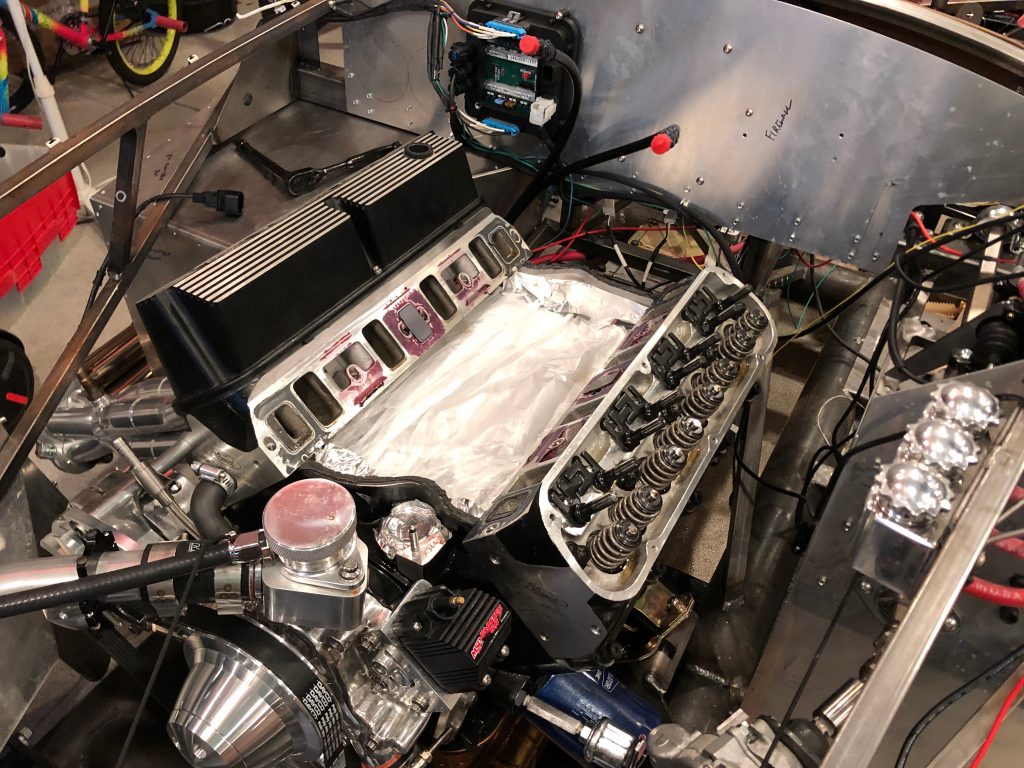 …then pulled the head. I had forgotten that this head was the one that was originally on the right side of the engine (and not the one that was more significantly damaged when the nut went through the engine). That makes me suspicious that the problem is not in the head. Given that we’ve eliminated everything in the valve train, there’s not much else that could be causing this problem. 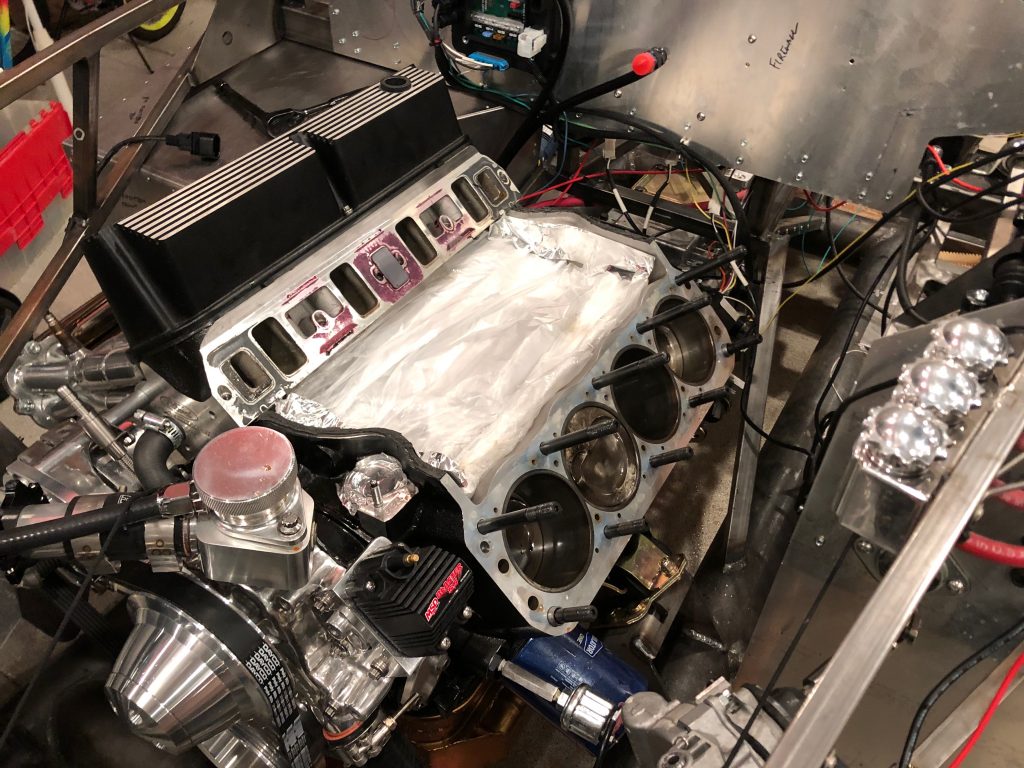 Work on our home remodel has taken virtually all of my spare time, but my dad and I have continued to speculate about what could be causing this noise. One thing we wished we had done when Dino got the noise to disappear the first time was swap the lifters between the suspect valve and another one. We got together a couple of times and tried to eliminate the noise again, but were unsuccessful. Dino offered to stop by again, so we took him up on the offer. He adjusted the lifter preload again with the engine running and managed to eliminate the noise again. Not too surprisingly, it was on exactly the same valve; the #6 intake valve.

We pulled the rocker and carefully examined it and the corresponding push rod. Not seeing any issues, we adjusted the #6 piston to TDC and used a spring compressor to remove and examine the spring and valve. Not too surprisingly, everything looked great.

Dino’s pretty convinced now the problem must be in the head. It’s clear that the problem is localized to the valve train and we’ve eliminated everything but the valve and guide (or potentially a crack in the head itself.  We have a new head on order, so I started pulling the engine apart. 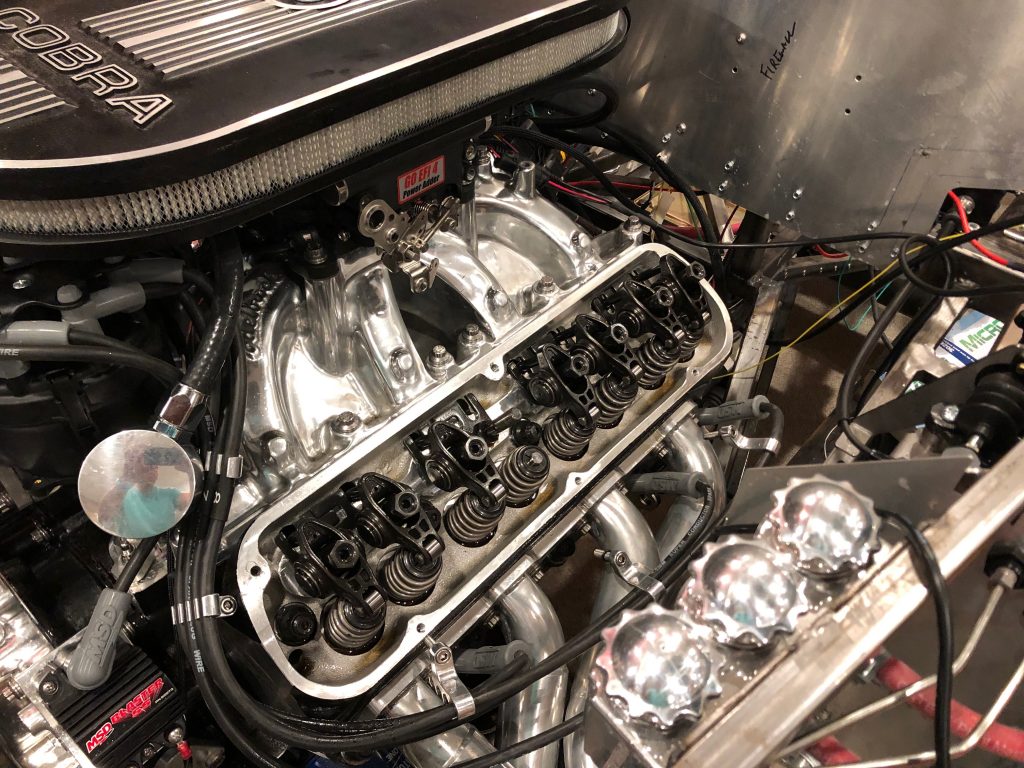 I didn’t have a lot of time tonight, but I pulled the remaining rockers and push rods as well as the side pipe and exhaust manifold. I also pulled the air cleaner and distributor. Once I drain the coolant out of the block, I’ll pull the intake manifold and head. 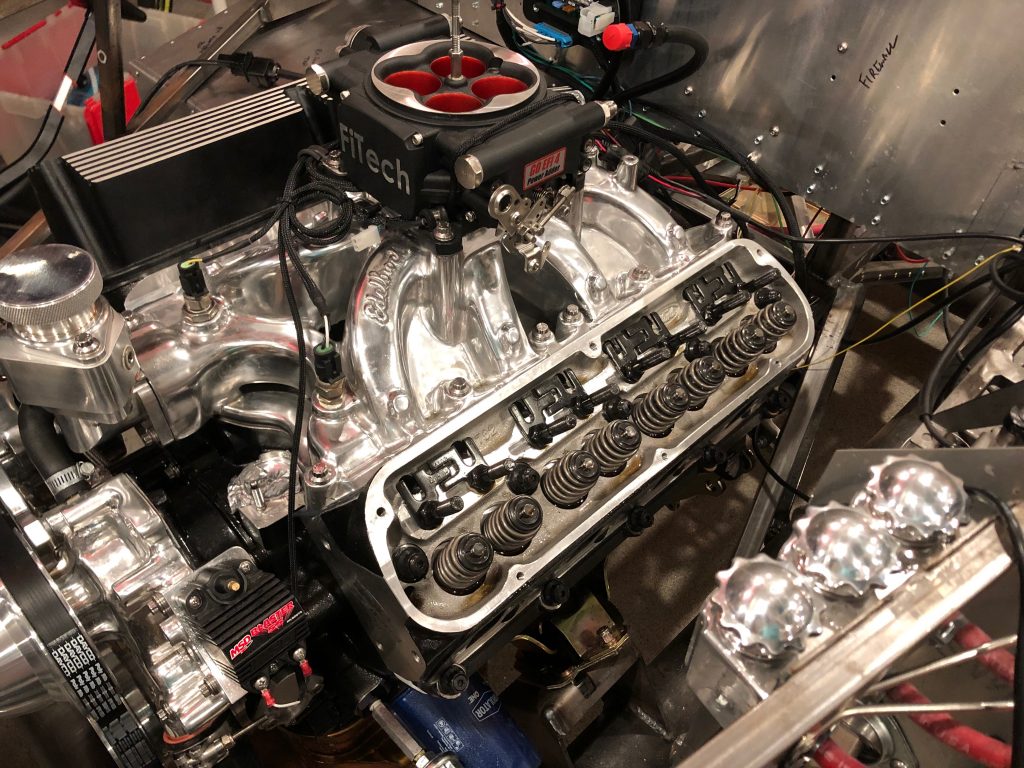 Sadly, the engine makes exactly the same sound with the new lifters. Either we didn’t get the preload set right on these lifters, or the problem is a bad rocker or pushrod. I’ll continue the diagnosis…

I wrapped up the engine reassembly, but it was too late to fire up the engine. Hopefully, I can test it out before heading to work tomorrow morning. 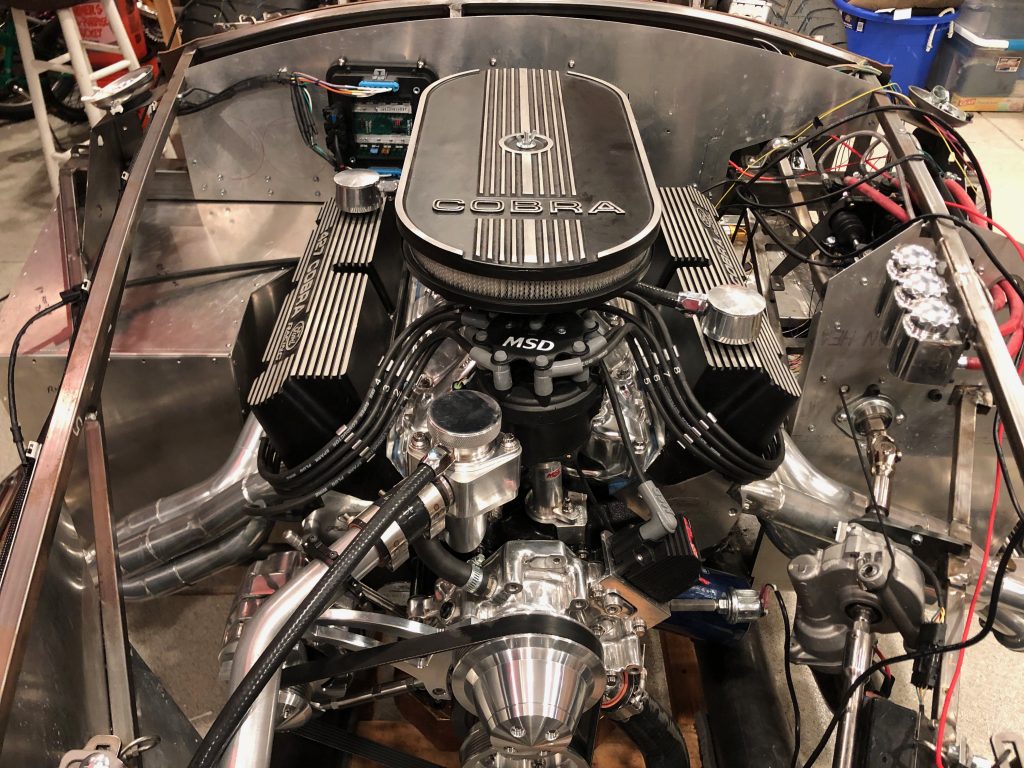 My dad stopped by tonight and helped me reassemble the engine again. We cleaned up the heads and reinstalled them with new gaskets, then dropped in the new Morel lifters. Fortunately, the new lifters were exactly the same height as the old lifters, so we could reuse the existing pushrods. While installing the lifters, we did take the opportunity to adjust a couple of the guide plates to put the rockers in the center of the valve stems.

I still need to stab the distributor, hook up the electrical connections, install the air filter and fill the system with coolant before I can run the engine, but hopefully that will be pretty quick and we can run it tomorrow. 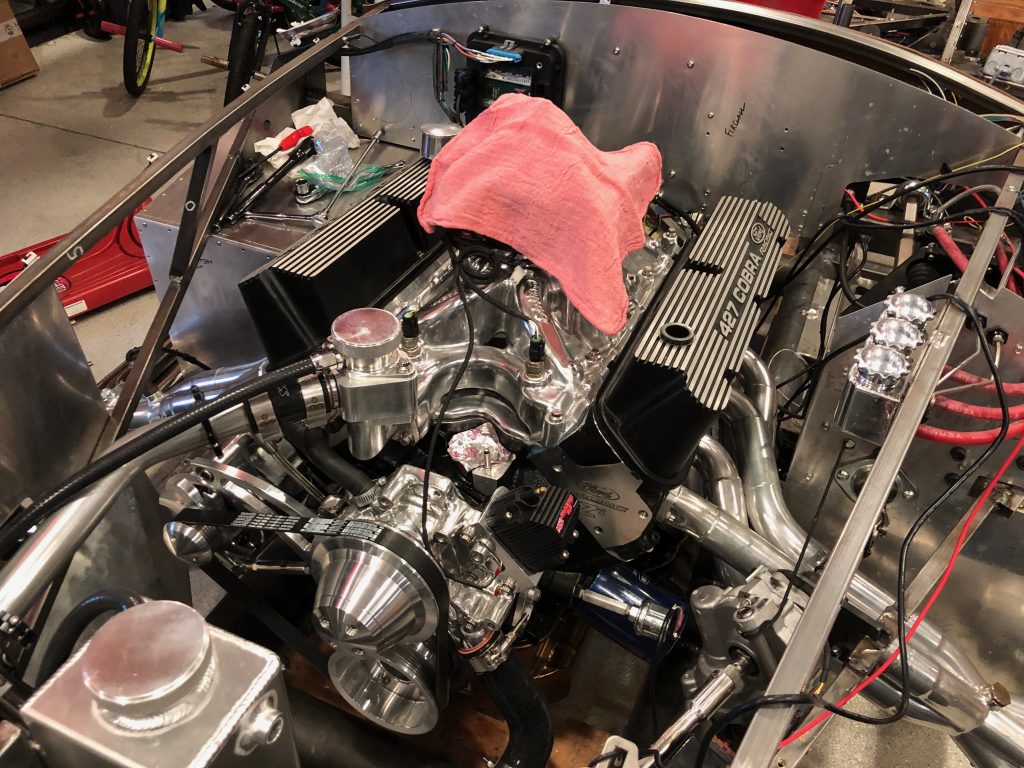 My dad picked up the lifters from Dino today. Not too surprisingly, Dino did find a tiny amount of damage to the valves in cylinder #5 (where the nut spent most of the time). The valves were bent about 1-2 thousandths, probably caused by the nut getting pinched between the top of the piston and the partially open valve. Dino reground the valves so that they will seat properly in the head.

My dad and I tore down the engine and removed the defective lifters. While we have the engine apart, I decided to pull the heads and have Dino double check there are no issues.

We have a set of Bullet (Morel) 5323 lifters on the way and we’ll get those installed shortly. 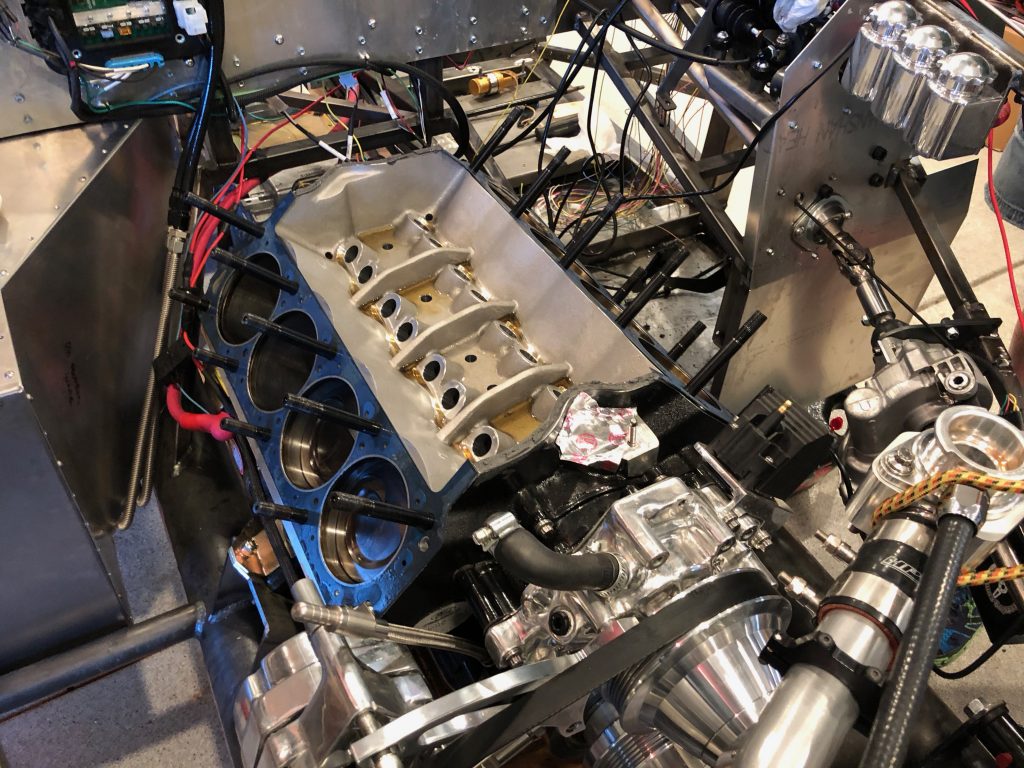